Extract taken from “For Every Lie” by J E Seaward

The horrors of a cold Victorian winter did not immediately touch the Atkinsons and the better-off classes in Hammersmith, nor even Mary herself. She had the protection of a warm kitchen, food in her stomach and clothes on her back. She had a better life than many, but she also had first hand knowledge of poverty – it was all around her. There was her own mother working long, hard hours at the laundry for little pay. Her mother’s landlord had callously threatened to throw her out when she’d complained about the leaking roof, saying there were many who would pay double for such a dwelling. 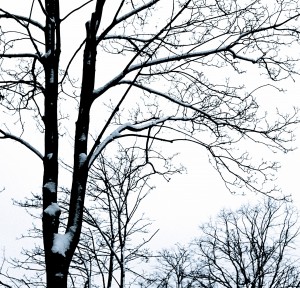 Dire poverty, hunger and crime were thrust in Mary’s face on her daily shopping trips to King Street. She saw a whole family begging, sitting among refuse from the shops to keep themselves warm and dependent on donations from passers by before being able to buy a loaf of bread or a cup of tea. Ragged, dirty-faced children, as young as three or four, approached strangers to try and sell any small thing they had stolen or found on the streets. Some would offer wood or rope they’d gleaned from the riverbed at low tide – anything, from a lump of coal to a lace-edged handkerchief.

Some mornings, shop windows were boarded up after being smashed by looters during the night. This prompted many shopkeepers to install iron grilles over their windows – like prison bars, reminding everyone of the consequence of crime. The only windows that were never broken belonged to the undertaker’s. The rate of death doubled in a harsh winter and death was a profitable line of business. Each clothing shop displayed the latest styles for mourning along with winter tweeds and furs. Jewellers took their jet and diamond mourning brooches from under the counter and put them on full view. Even the rich were not protected from death; it was just more dignified. 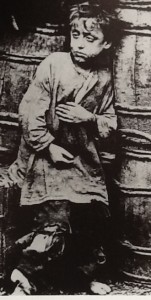 The worst thing that Mary saw during that winter was the naked corpse of a young boy, wrapped in rags and newspaper. It had been left in an alley beside Mme Goosen’s shop. His stomach was distended with malnutrition and his skin was filthy and covered with sores. The police had been called and they were unwrapping the body as Mary came out of the shop. There were a few onlookers trying to give reason to the tragedy.

‘Must be starvation – dear God, look at the state of him!’

‘But why leave the poor little devil naked, all alone?’

‘Couldn’t afford the funeral, I shouldn’t wonder.’ An undertaker’s cart came and the police moved the crowd aside.

‘Move away, ladies and gents, get about your business. He’s with his Maker now. No more to gawp at.’ It made Mary feel deeply sad. The boy had looked about her brother’s age and she could think of nothing else that day and he came into her dreams for many nights after that. 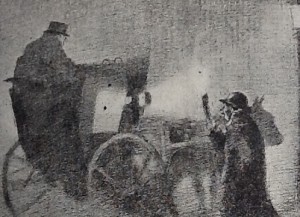 November… Thick fogs “pea soupers” brought London to a standstill and death to the streets.

The Victorians lived in a an unfair society of rich and poor. There was a middle class but not many people were able to aspire to it once poverty had set in. This situation grew worse throughout the Victorian era – even craftsmen were poorly paid and lived a relatively plain life. Britain was conquering the world and technology was beginning to move forward – but people were still dying from poverty. Children were starving, and there was no where to turn except to take charity from the church and, the final degradation… the workhouse. There were other options if you were really desperate; crime and prostitution.

There was no national health, social security or council housing and landlords took good rent for appalling accommodation. Slums bred disease, and sick people couldn’t work. Despite the incredible improvements in social and healthcare provisions, there are still parts of our society, let alone the rest of the World, that struggle beyond most of our imaginations.