The writing of ‘FOR EVERY LIE’

As a child I was overly inquisitive and annoyed my mother with endless questions about her family. The reason for this was because she always refused to tell me, making my desire to know far greater. I had no idea of my mother’s correct age until I was in my early teens and, about the same time, I discovered that my grandmother had married three times but not one of her husbands were my mother’s father. No more information came my way until much, much later.

My mother was now in her late eighties: I wouldn’t say the flood gates opened but, when I asked questions I began to get answers. Where she had lived and who’d brought her up. Where she’d gone to school and what friends she’d had. This progressed to her mother’s life, then her grandparents, great grandparents and beyond. She gave me their names, when they’d been born, what they’d done for a living and some slightly sketchy, yet intriguing, outlines of their lives.

Around that time, I had been writing and illustrating a book for children, Firewash &Sons, not such an unusual thing for an artist to attempt, and I was still enjoying painting. But after my mother told me about her family, a part of my brain, that I’d had no idea existed, began to unlock. Writing for children is certainly not easy for an inexperienced writer, but a novel… impossible. Yet the proverbial lightbulb had been turned on, and all I wanted to do was write a novel about the lives of my mother’s family. The paint brushes and canvases were put aside and I have not picked them up since.

I told my mother I would write about her family; she laughed… not surprisingly, as I had been a painter and illustrator for many years. Sadly, she was never to know that I would acquire a second-hand laptop and start to research her family on Ancestry. I found her information to be very accurate, with certainly enough intrigue for a novel. But, as I went back further, it was her great grandfather’s story, John Randell, that really caught my imagination and got the ball rolling. So that is where I started, and the novel, For Every Lie, was written.

(Jessie is one of the main characters in For Every Lie, and her story continues, with her new husband Henry Richards, into my second novel which I am writing at the moment). 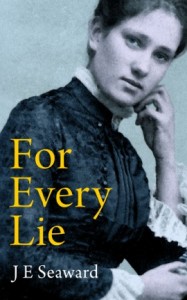 The church bells rang out: the peals could be heard as far as the fields of Mortlake and around St Peter’s Square, along the river, over roof tops and into the rabbit warrens of Fulham, as the new husband and wife left the church.

Based on the real lives of John, Mary, Jessie, Frank and Agnes, For Every Lie follows two generations of young people making the best of life – and love – in London’s fast-growing Victorian suburbs. Moving and funny, this is a story of both true romance and terrible heartbreak, and the sheer joy, wit and sauciness of youth.

For Every Lie is published by www.provinghouse.com