HAMMERSMITH FLYOVER…or shall we go under?

West London has always had a special meaning for me – mainly due to the Randell family, my ancestors, having been traceable residents in Hammersmith for almost 200 years. They lived in the diocese of St Paul’s Church, which administered to and registered many of my family’s births marriages and deaths. This was in the days before Hammersmith’s heritage had started to be cut up, torn down, built on and left behind for modernity. St Paul’s now proudly shows off its classy, Victorian architecture, to the motorists on the Hammersmith flyover. 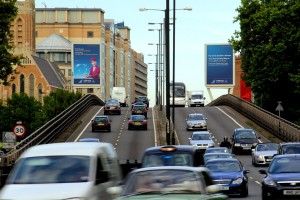 A view of St Paul’s Church from the Hammersmith Flyover.

Carnforth Lodge, the Six Bells pub and a terrace of houses in which my G.G.Grandfather, John Randell, lived in Queen Street – opposite St Paul’s Church. Picture taken approx. 1890.

In the 1930’s, when the Gaumont Palace cinema was built, it rudely flattened the historic Carnforth Lodge with its beautiful garden, the Six Bells Pub and a small terrace of early victorian houses in which my Great Great Grandparents had lived in the 1860’s and 70’s. St Vincent House Convent and Temple lodge, once lived in by the artist Frank Brangwyn, escaped the bulldozer and were allowed to survive. The 2nd world war made more holes in Hammersmith’s layout, including St Vincent House Convent and the northern end of the Fulham Palace Road, where my Great Grandmother, Jessie Randell, had lived up until 1883. 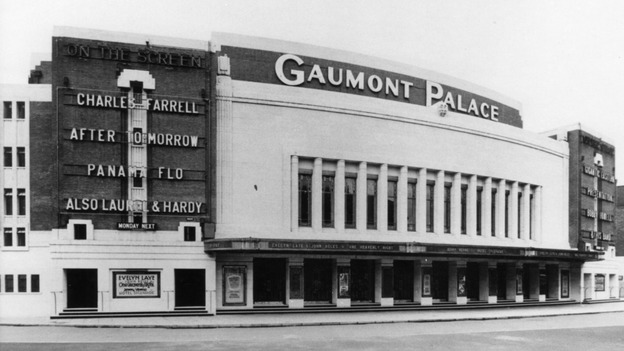 As a child, visiting my Grandma Jane in Hammersmith from South East London was a days excursion. I saw much building, and demolition, taking place and witnessed the building of the flyover during the late 1950’s until it opened in 1961. By then, the suburb of Hammersmith had firmly become part of London and was striving to provide more housing and employment for its fast growing number of residents. It also had to find a better transport network to prevent further bottlenecks as the ever-increasing traffic tried to pass along the same roads that the stage coaches had used on their way West in the 1800’s. 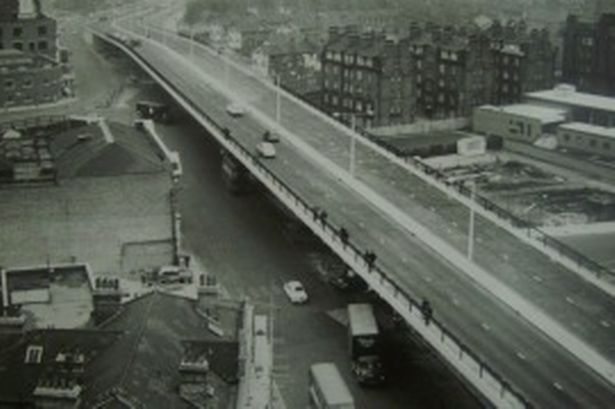 The view from the top of St Paul’s Church in 1962 after the flyover was opened.

So this is how the Hammersmith flyover came about. In its time, it was seen as a remarkable feat of advanced engineering, linking the A4 to the M4. It had under-deck heating, solitary expansion joint and precast, segmental and pre-stressed concrete. It was one of the first of its type in the world. Now, a mere fifty three years later, it is reviled as a monster which never had it’s heating turned on after the first year as neither of the relevant councils would foot the £4,000 heating bill. Now the salt and grit that is used to stop the surface freezing in winter is the very cause of its demise as it’s been corroding the cables and making the flyover unsafe. It is now costing millions of pounds to repair.

An artist’s impression of how Hammersmith would look with the flyover removed and replaced by a tunnel – known as the flyunder. (image by www.hayesdavidson.com)

They say you can never look back but, thanks to some excellent historians, enthusiasts, early cameras and ancestry, the past hasn’t all been forgotten. There is a great movement nowadays towards bringing more green space and trees back into our lives. Green fields, gardens and common land, judging by old ordnance survey maps, is something which my ancestors in Hammersmith had plenty of. An excellent project has been under way promoting the Hammersmith Flyunder. With the backing of residents and the London Mayor, the flyover is in line, sometime in the future, to be removed and a flyunder put in its place. This will free up a huge amount of land for new homes offices and that all important green space. St. Paul’s Church will breath again, as will the residents in pleasant walkways with trees, cycle paths and the promise of a Hammersmith to be proud of. I’m sure my ancestor’s would approve!