An extract taken from “For Every Lie” by J E Seaward

At eight o’clock on Christmas morning, a clean skinned, rosy cheeked, shiny haired Mary, recklessly ignoring a fresh covering of ice, ran up the steps from the kitchen door wearing her best dress covered with a thick, brown cloak and a bonnet secured with a woollen scarf. She put down her basket and a bundle of presents she’d tied up in a shawl and unashamedly flung her arms around John’s neck. He kissed her, lifted her up and swung her around in a circle, as easily as if she were a child. Their exuberance echoed along the silent, empty street, flushing a vagrant tomcat out of his cover. John picked up Mary’s things and they began to walk, working up a good pace to keep warm.

By the time they’d reached the middle of Hammersmith Bridge, a red sun had poked its nose above the horizon, spreading a dazzling rippled light over the surface of the Thames. They stopped and looked around them: this had become their custom and was their favourite place. They stood for the best part of half an hour and watched in awe as the sun sent its liquid-looking mass into the sky then disappeared behind a bank of pink cloud. The river reverted to its normal, rolling blackness, and with the full light they were surprised to see that the water near the bank had frozen into strange shapes with the flotsam and jetsam. There, a pair of mallard ducks were cautiously, but comically, exploring their new slippery terrain. 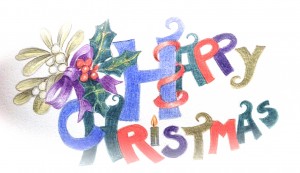 And a Happy New Year to all.